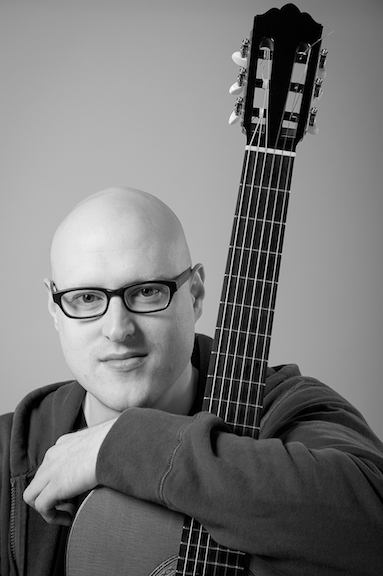 “Dan Cosley is a real, gifted musician with genuine skills as a composer. He belongs to a restricted community of guitarists who place music even above the guitar and that’s the main reason why I believe in him.” – Roland Dyens

“Exceptional qualities as a performer, scholar, and human being… Cosley is also a very talented and accomplished composer and improviser.” – Ricardo Iznaola

“Cosley has all the stuff.” – Marc Ribot

An expert on classical guitar technique and repertoire, as well as jazz improvisation, Cosley has successfully prepared students to attend top institutions such as the Berklee College of Music.

For three years he served as professor of music at Marylhurst University in Portland, Oregon, where he taught classical and jazz guitar, orchestration, guitar ensemble, notation, and composition. He also founded the university’s improvisation festival, organizing a concert and free-improvisation masterclass with guitarist Marc Ribot.

While living in Portland, he also served as conductor of the Portland Community College Chamber Ensemble, and was also a member of the guitar and composition faculty.

In 2017, he retired early from academia and relocated to Kyoto, Japan, to intensify his composition and performance activities and establish wayoftheguitar.com, a comprehensive online training system for fret-board harmony, aural skills, and improvisation.

In 2013, the legendary luthier Robert Ruck selected Dan to demonstrate two new instruments in a solo concert at Marylhurst University.

He made his European debut at the Rome Festival (Italy) in 2000, at the age of 21, performing the music of Heitor Villa-Lobos and Joaquín Turina.

Other notable performances include appearances at the Up-Close Avant series (Denver, Colorado), and the Shonai International Guitar Festival (Japan).

He has performed with many artists outside of the classical domain, including Norihiko Hibino, Samm Bennett, and Chris Broderick (Megadeth).

Notable collaborations include duos with guitarist-composer Nathan Kolosko, and session work for producer Michael Hoppé, head of A&R for PolyGram Records (Vangelis, The Who, ABBA).

The Guitar Ensemble Association of Japan commissioned the substantial Waltz Triptych for guitar quartet, a work that has had multiple performances in Japan since its première in 2010.

Cosley premièred his Concerto for Guitar in Denver, Colorado, in 2005.

Multiple jazz & free-improvisational works have followed, including many rock-influenced works for electric guitar, bass, and drums.

His ground-breaking solo electric guitar arrangements of the music of Charles Mingus have been met with considerable acclaim.

For two years, he served as staff engraver and editor of masses, motets, and Gregorian chant for the world’s largest Catholic publisher, Oregon Catholic Press.

While at Lamont, Cosley became the first guitarist in the conservatory’s history to win first prize in the school’s concerto competition, as well as the first student to début an original concerto on a graduate recital. He was recipient of the Ricardo Iznaola Scholarship, and the Graduate Recital of Distinction award, among many of the school’s other top honors.

Cosley is fortunate to have been mentored by a number of leading musicians including saxophonist Roscoe Mitchell (Art Ensemble of Chicago), guitarists Leo Kottke, Marc Ribot and Roland Dyens, and multi-instrumentalist Ian Underwood (Frank Zappa).

Get started now
We suggest moving this party over to a full size window.
You'll enjoy it way more.
Close
Go Fullscreen